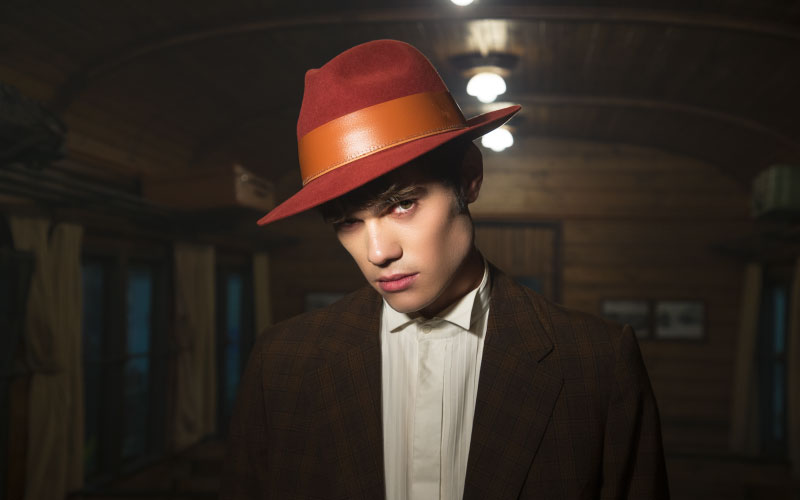 Regardless of the age and style of the wearer, hats are among the most important accessories in men's and women's wardrobes today. The fedora is the most sought-after model among fashionistas and young people because of its ability to make even the most casual and basic looks unique.

The shape of the fedora, which is characterised by the fact that the brim can be made in different sizes, allows for countless customisations. The difference between summer and winter fedoras is determined by the material from which they are made. From straw to felt, linen to cotton, fedoras are fashionable accessories that can be worn all year round.

Today the fedora, thanks to its elegance, has the important role of completing the look of the wearer.

The fedora is one of the hats that in everyone's imagination brings to mind a masculine headgear but in reality hides a beautiful feminine story.

On 11 December 1882 actress Sarah Bernhardt plays Fédora, a character in a play by French author Victorien Sardou at the Théâtre du Vaudeville in Paris. During many scenes of the play, she wears a cone-shaped hat with a slanted brim over one eye and raised at the back. It was a triumph and the hat was then nicknamed Fedora in fashion.

From here it was a short step and the hat, born in the theatre, was replicated in the productions of all the hatters until it became an American symbol of "nice dress" for gangsters and today for the elegant man.

The Fedora is an elegant men's hat that can be worn in both winter and summer. The conical cap is defined by a central wavy line running the length of the head and two darts at the sides. The wing of the hat can be of medium to large size (5.5cm - 9.5cm), raised at the back and worn today sloping over the eyes instead of the original on one side.

The fedora is the most classic and elegant headgear because of its wide wing, which can be worn by playing with the tilt. 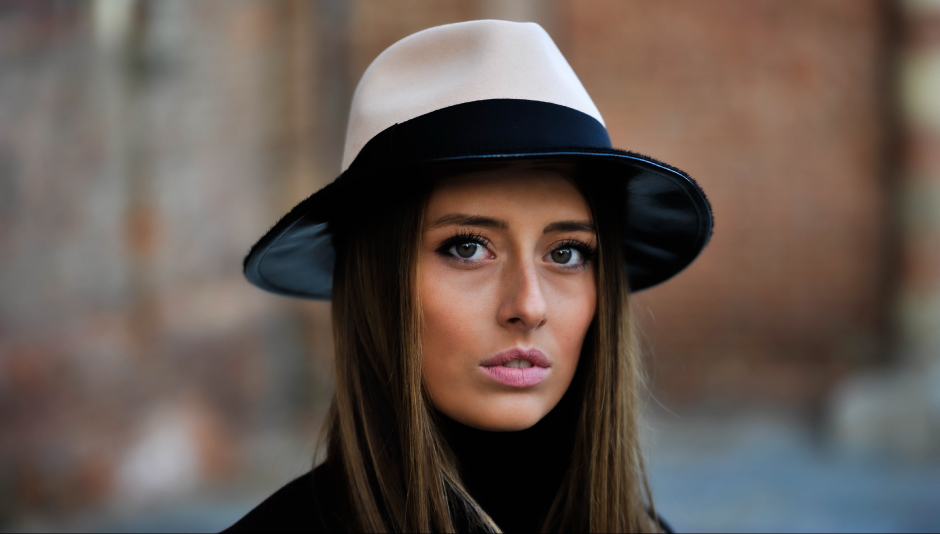 Over the years, the Fedora hat has become the most widely used and best known form of hat for men and women. The particularity of this shape is that it confers elegance and class once worn.

Whether it is made of straw, felt or fabric, our fedora is 100% made in Italy and is handcrafted entirely by hand. The steps involved in making a felt fedora are as follows:

Since the brand's foundation, Doria 1905 has made the fedora one of its most iconic pieces by playing on creating interesting shapes that appeal to both men and women.

How to Choose the Right Fedora Hat for You

Choosing a men's or women's fedora is a very important step and should be approached with great care. Depending on the intended use, the composition of the fedora may vary.

Choosing a neutral colour and then playing with the colour tones of the belt makes the fedora suitable for a ceremony, a party or an informal occasion. In all this, of course, you need to be completely in tune with your outfit.

Depending on the time of year, the choice of fedoras varies considerably. During the summer season, straw fedoras such as the sought-after Panama hats or fedoras made of papier, a precious paper fibre, are more suitable. The winter season, on the other hand, allows the use of heavier materials to protect against the cold and rain. The most suitable models are fedoras made of felt or wool.

How to Choose the Right Hat Size 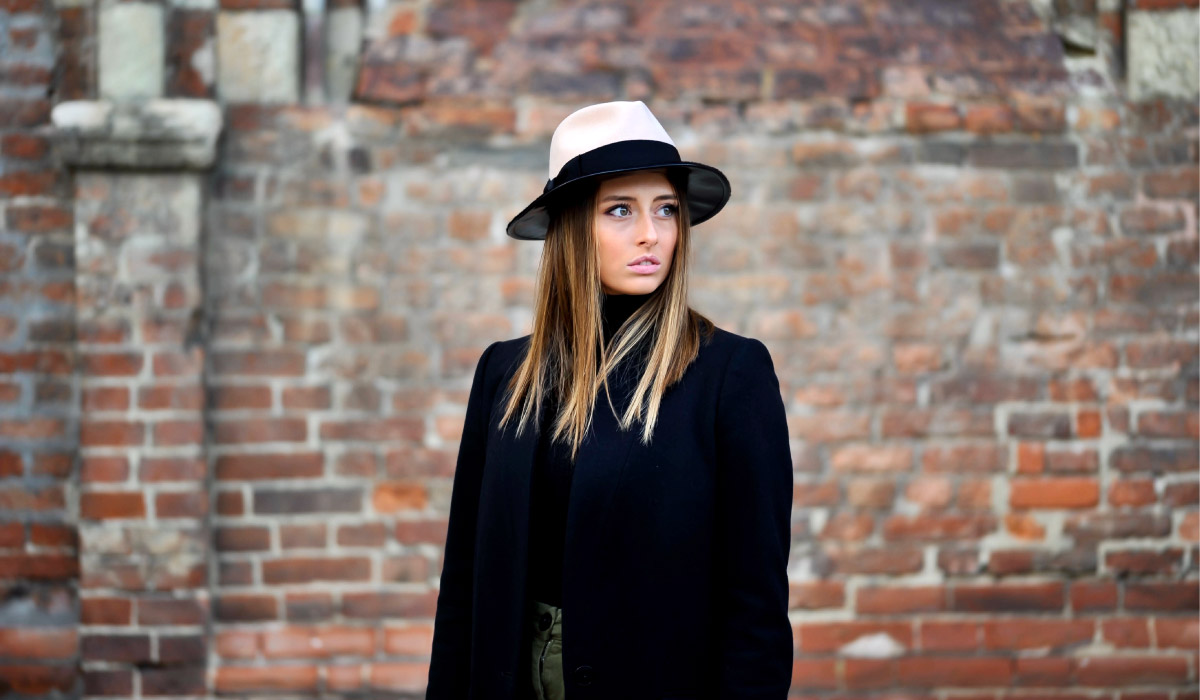 Choosing the right hat size is always a critical moment, also because every hat made by hand and then sold in hat shops has very different sizes compared to the classic ones that clothing shops have accustomed us to.

Hat sizes are calculated in centimetres and range from size 55 (the smallest) to 62 (the largest). There is a very simple and quick procedure to find out which size is right for you.

To calculate your correct hat size all you have to do is take a tape measure, measure the circumference of your head by holding the tape measure just one centimetre above your ears, which is the point where your hat will fit perfectly.

The Fedora is a hat with a conical cap defined by a central brim running the length of the head and two darts at the sides, also known as "drafts". The medium to large wing is raised at the back and worn sloping over the eyes or tilted to one side.

This model, created at the turn of the century, was originally a wide-winged women's hat. However, around 1920, it became a must-have item in the wardrobe of wealthy men.

Produced by the Doria company since the early 1900s in felt, straw or fabric, it is completely handcrafted and made by hand. It is one of Doria's iconic hats because of its curious history that plays on the masculine and feminine, just like the spirit of the brand.

We use cookies on our website to give you the most relevant experience by remembering your preferences and repeat visits. By clicking "Accept", you consent to the use of ALL the cookies.
Do not sell my personal information.
Cookie SettingsAccept
Manage consent

This website uses cookies to improve your experience while you navigate through the website. Out of these, the cookies that are categorised as necessary are stored on your browser as they are essential for the working of basic functionalities of the website. We also use third-party cookies that help us analyse and understand how you use this website. These cookies will be stored in your browser only with your consent. You also have the option to opt-out of these cookies. But opting out of some of these cookies may affect your browsing experience.
Necessary Always enabled
Necessary cookies are absolutely essential for the website to function properly. These cookies ensure basic functionalities and security features of the website, anonymously.
Functional
Functional cookies help to perform certain functionalities like sharing the content of the website on social media platforms, collect feedbacks, and other third-party features.
Performance
Performance cookies are used to understand and analyse the key performance indexes of the website which helps in delivering a better user experience for the visitors.
Analytics
Analytical cookies are used to understand how visitors interact with the website. These cookies help provide information on metrics such as the number of visitors, bounce rate, traffic source, etc.
Advertisement
Advertisement cookies are used to provide visitors with relevant ads and marketing campaigns. These cookies track visitors across websites and collect information to provide customised ads.
Others
Other uncategorised cookies are those that are being analysed and have not been classified into a category as yet.
ACCEPT AND SAVE

Back to top Filter