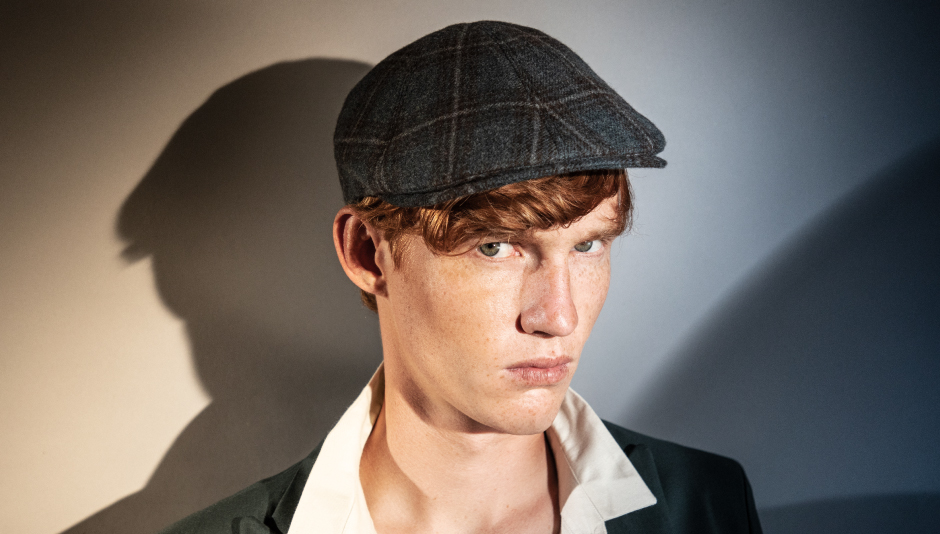 Originally designed as a men's headgear, the coppola is a cap with a small visor and a dome that tends to be flat or with longitudinal cuts. From 1970 onwards it also became a headgear worn by women who like to impress. Doria 1905, which has always been a spokesperson for this style, began to advertise it as a unisex garment in its collections, astonishing the world of hats.

Fabric or felt caps are essential accessories in men's wardrobe. Whether for sports or to wear in daily life, these caps have always characterized men's clothing. Their use in internationally famous TV series such as Peaky Blinders or Irish Man have made hats, the most sought-after men's hats of the moment.

The ways to call this type of cap are different: Flat Cap, Driver Cap, Golf Cap and finally in Italian Coppole. What is certain is that due to its versatility, the coppola remains one of the most widely used men's hats worldwide. 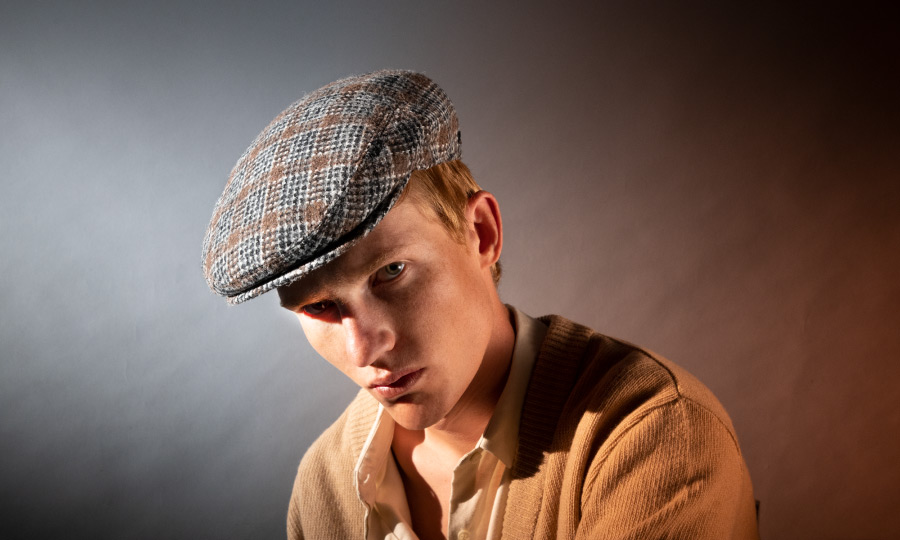 The coppola is a cap with a visor, flat dome and with a side band. It originated in the early 1500s where they are seen in the court of the Tudors, a historic English royal family, but also in some Neapolitan writings from 1789.

Today the coppola is one of Doria 1905's iconic hats thanks to its curious history that plays between masculine and feminine like the spirit of the brand. Produced by Doria 1905 since the early 1900s, it is the first model of hat made in the first Doria workshop. Made in both winter and summer fabrics, it is completely handcrafted.

The fabric from which men's hats are made today is worked by the hands of skilled craftsmen, still following the original manufacturing steps:

The origins of the coppola, a typical men's cap, date back to the 16th century and more precisely to England. Following the passing of a good law, the Tudor court obliged the people to wear headgear made of exclusively home-made fabric. This was the birth of the first flat cap. In Italy this cap is now called Coppola and in France it is known as Bonnet.

The coppola has a curious history in Italy, where its origin is divided into two 'branches'. The first part sees it arrive in the mid-1800s in Sicily, worn by English families who had moved there. The other part sees it as an elaboration of a Neapolitan headgear, called coppolone as a derivation of the term cupola(cuppola) as an element "on top of the head". A quotation from a Neapolitan song of the time, telling the story of the famous rebel Masaniello, refers to his headgear as a red cupola. Well, that coppola is a simple bonnet, but the term in popular use seems to have given its name to the flat cap imported by the English.

The certainty is that the hat has spanned centuries and styles with its various styles and names. From flat cap to driver cap, from golf cap to gatsby cap, the coppola was worn by men until the early 1900s. It became an iconic and fashionable garment, following the styles of the country it arrived in, until it became wedged, giving birth to the Irish cap.

How to Choose the Right Hat for You

Choosing the most suitable type of hat for your needs is a very important step and should be approached with great care: whether for sporting activities or more formal occasions, the choice of hat should be perfectly in tune with the style of your outfit.

For a more sporty-casual look or for styles that are a little more urban, the choice is oriented towards fabric caps with herringbone patterns or with classic coloured chequered lines; a different choice if the use is dedicated to a more formal occasion: in this case the choice will fall on something that reflects one's own style and with colours that match one's own clothing, preferably solid colours.

We must also pay attention to the season in which we want to use this accessory: in the cold season the choice of the hat will fall on a heavier and possibly waterproof fabric, while in the case of a summer hat we can choose a classic canvas hat with brighter colours.

How to Choose the Right Hat Size

Choosing the right hat size is always a critical moment because every hat, made by hand and then sold in hat shops, has very different sizes from the classic ones that clothing shops have accustomed us to.

Hat sizes are calculated in centimetres and range from size 55 (the smallest) to 62 (the largest). There is a very simple and quick procedure to find out which size is right for you.

To calculate your correct hat size, all you have to do is take a dressmaker's tape measure, measure the circumference of your head by holding the tape measure just one centimetre above your ears, which is the point where your hat will fit perfectly.

We use cookies on our website to give you the most relevant experience by remembering your preferences and repeat visits. By clicking "Accept", you consent to the use of ALL the cookies.
Do not sell my personal information.
Cookie SettingsAccept
Manage consent

This website uses cookies to improve your experience while you navigate through the website. Out of these, the cookies that are categorised as necessary are stored on your browser as they are essential for the working of basic functionalities of the website. We also use third-party cookies that help us analyse and understand how you use this website. These cookies will be stored in your browser only with your consent. You also have the option to opt-out of these cookies. But opting out of some of these cookies may affect your browsing experience.
Necessary Always enabled
Necessary cookies are absolutely essential for the website to function properly. These cookies ensure basic functionalities and security features of the website, anonymously.
Functional
Functional cookies help to perform certain functionalities like sharing the content of the website on social media platforms, collect feedbacks, and other third-party features.
Performance
Performance cookies are used to understand and analyse the key performance indexes of the website which helps in delivering a better user experience for the visitors.
Analytics
Analytical cookies are used to understand how visitors interact with the website. These cookies help provide information on metrics such as the number of visitors, bounce rate, traffic source, etc.
Advertisement
Advertisement cookies are used to provide visitors with relevant ads and marketing campaigns. These cookies track visitors across websites and collect information to provide customised ads.
Others
Other uncategorised cookies are those that are being analysed and have not been classified into a category as yet.
ACCEPT AND SAVE

Back to top Filter